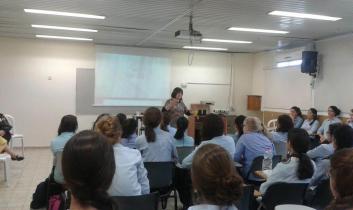 At the Beginning of the School Year the Volunteer Project "A Circle of Mercy" was opened.

It's a project of "Yad LaYeled HaMeyuchad" in cooperation with the Beit Rivka College in Kfar Chabad. It is the 10th consecutive year of its operation!

On Sunday the 6th of September 2015 the inauguration ceremony for the new school year 2015-16 took place including 60 female students of the college participating in the project this year. They will coach 60 children with special needs located from Eilat in the south up to Safed in the north.

The ceremonial event was opened by the head of the special education department of the college, Mrs. Nurit Prop. She shared with students success stories from the previous years and invited two graduates to tell themselves how much the project contributed to them personally. Then spoke the representative of the parents, a mother of two children with autism. She described how much the families enjoy these hours of the volunteers.
The director of the college, Rabbi Moshe Chefer, expressed his greetings and then there was a pause to enjoy the festive food the association had prepared.

The second part was opened with a moving film about Shneur, one of the children of the project. His parents told how much strength and joy sweet Shneur gives to the family, and how much they get satisfaction from seeing his progress also together with the girl volunteering through "A Circle of Mercy". 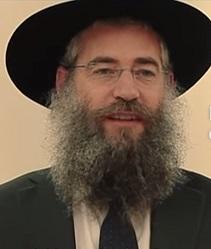 The event was concluded by the Director of "Yad LaYeled HaMeyuchad", Rabbi Mendi Beliniztky, who congratulated the participating girls, thanked warmly to all those who take part in the project, and expressed the hope that the contact between the volunteers and the children will continue beyond the term of the project.

All speakers thanked the Project Director, Mrs. Sara Rivka Lipsch for her sustained devotion to the sacred work, which deserves all praise.