The Israeli Delegation to the Parolympic Games in Los Angeles 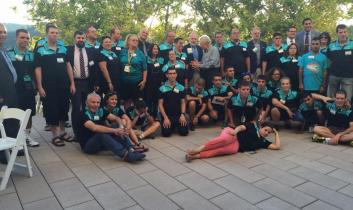 In Los Angeles a reception took place for the Israeli delegation to the Parolympic Games.

At the ceremony two athletes spoke, who described how they had been granted the opportunity to serve in the IDF in spite of their handicaps.

Representatives of the Special in Uniform project of the Yad LaYeled HaMeyuchad association congratulated the athletes and told the big audience about the importance of integrating young people with special needs in the army.

We wish the athletes success and are proud of you!