The multiple award winner, the Jewish movie star, Michael Douglas, met in New York with the founder and Chairman of "Special in Uniform", Lt. Col. (res.) Ariel Almog and the soldier Roni Levi. Douglas was excited to hear about the program and about the special military service of Roni in the IDF.

In picture below: Ariel Almog left of Michael Douglas, Roni Levi on the right side.

A special program of the Lend a Hand to a Special Child Foundation enables young people with autism and special needs to serve in the IDF.

Every day 23-year-old Amit Milhofer wakes up, puts on her Israel Air Force uniform, and proudly goes to work serving her country.

While for most Israeli teens this is the natural next step in their lives, for Milhofer, who has an intellectual disability, this is truly a remarkable achievement. Taking part in a special initiative of Israeli organization Yad Layeled Hameyuchad, a partner of Jewish National Fund (JNF), Milhofer, along with other youth with autism and developmental disabilities, is able to serve in the IDF as part of the organization's 'Special in Uniform' program.

"I wanted to be a soldier and I wanted to give back to the country," Milhofer recently told The Jerusalem Post.

"It's important to give back to the country, you give from yourself and you learn things about yourself that you didn't know," she said.

Milhofer began volunteering in the IDF through the Special in Uniform program in 12th grade, where she volunteered once a week with Home Front Command. Following nearly two years of volunteer service, she was formally enlisted in March this year, serving in the IAF equipment warehouse by helping to answer phones and managing equipment.

"It is something that every morning I arrive to the base happy. It's good for me and I also feel that I am giving back to the base," she said.

Milhofer, who still has some two years of service left, said that she feels she has already gained so much through the program. "I am more independent and I learn to arrive on time and to listen and to follow orders and do what I'm told," she said of her service. "To wake up early, to get ready to stand by timetables – before that I didn't know how or what it was to give back and to help."

Rakefet Milhofer, Amit's mother, told the Post that she has seen a tremendous positive transformation in her daughter since she joined the Special in Uniform program. "She is more independent, more ready and open for new things and experiences, she meets with friends more often – she just has more independence," she said.

For Rakefet, seeing her daughter who – was born with intellectual disability syndrome – serve in the air force is not something to be taken for granted. Traditionally, young people with disabilities are given automatic exemptions from military service.

"Like every citizen of Israel I wanted my daughter to serve in the IDF, I served in the air force, my brother served in the air force, my father was in intelligence – in Israel this is part of our life routine," she said. "We received the exemption from the army, and we said, 'This is a pity,'" she recalled, "and then we heard about Special in Uniform and we wanted her to be a soldier; she wanted to be a soldier."

Rakefet said that the army, the commanders and the other soldiers have received her daughter "incredibly" as if she were their equal.

"One of the commanders told me that she has great potential and that he can see her advancing even further," she said. "We are very proud of her. I think it's important to say that parents need to provide help and support and always promote your child. My wish is for her to succeed as much as possible, and however much she can," she said.

"Amit has reached a position today that I had never dreamed of."

This sentiment echoes the core belief of the Special in Uniform project: that everyone belongs and has the right to reach his or her full potential.

Amit's story is just one of hundreds of youngsters who have participated in the project.

"This is a multi-phase program where the aim is to see the participants serve in the army, becoming more independent and in the end, integrating into society," Lt.-Col. (ret.) Tiran Attia, project manager of Special in Uniform, told the Post.

The initiative accompanies participants through a number of stages beginning with a basic introduction to new experiences for younger children, Attia explained. The second phase is for participants who are still in school and volunteer in the IDF on a weekly basis as part of their curriculum. They volunteer on army bases and learn to complete tasks that are requested according to the army base's needs.

"Here we examine the participants' potential and abilities, see if they are able to enlist and serve," Attia explained.

In the third stage, the participants are accepted by the IDF to serve as soldiers in the unique and supportive framework of the program.

"This is a critical stage in the transformation of these young people from citizens to soldiers and we invest a lot of resources in them and help them and guide them along the way," Attia said.

"For these soldiers to enlist it takes a lot of work . There is preparedness of the base, and of the other soldiers, and of the families themselves," he said.

Attia explained that the parents of children with disabilities wait years for their child's enlistment.

"For most parents it is natural for a child to go to the army," he said.

"But for a mother who knows that her child has special needs, that there is no chance for her child to enlist, and here suddenly they are able to serve, it is tremendous."

To date there are 256 participants in the program, 60 of whom are serving as soldiers, with nine bases from the North down to Eilat taking part, Attia said.

"All the work that these soldiers and the volunteers do is work that is needed," he explained. "We don't want them to simply come on base and do 'make-work.' We focus on their ability and disregard their disability," he said.

"We examine what the participant likes, what he or she can do and what the army needs.

"We examine every participant according to his abilities – we have one boy who really likes to cut lettuce so he works in the kitchen; we have others who have good technical skills, and so they work with dismantling computers," he explained.

In addition to serving in the IDF, the program helps integrate participants into a home for life, where they are able to live with other special-needs youth and receive support and assistance from professional staff according to their needs.

"After their service we also helping our participants with employment transition, they will receive assistance in finding a job that suits their abilities so that with the money they earn and the subsidy we provide they can live normal lives integrating into the workforce and into society," he explained.

ttia said that the program has helped to create a "ripple effect" and brings to the military more openness and awareness towards inclusion of people with disabilities, reflecting values that are inherent to Jewish life and tikkun olam, repairing the world and making it a better place.

Prior to joining the Special in Uniform initiative, Attia managed the Sar-El program for overseas army volunteers for 10 years, where he witnessed firsthand the dedication and high work ethic of volunteers with disabilities.

"I left the army two years ago, and towards the end of my tenure I saw a change in mentality regarding integrating people with disabilities," he said.

Attia said that currently there are some 200 young people with special needs waiting to join the program, though they are currently on hold due to budgetary constraints. Still, he is very optimistic, adding that he hopes to see the program reach 1,000 participants by 2020.

"The collaboration we have with the IDF has been incredible. At first there was some hesitancy, but everyone realizes that this is a win-win situation," he said. "Today, I even have commanders calling me and asking me to implement the program on their base.

"If in the past there was an immediate 'no' from the IDF, today there is an openness to integrate people with disabilities.

We are seeing an incredible change for the good," he said.

Due to the program's exceptional contribution integrating youth with special needs into the IDF, this year, 'The Jerusalem Post' will award its Social Affairs Prize to the Special in Uniform project. For donations, please contact: Israel 1800-930-930 USA-JNF 212.879.9305;240

To register for the Jerusalem Post Annual Conference: https://members.jpost.com/nyc2016.aspx

ANNUAL CONFERENCE By JERUSALEM POST STAFF \ 05/10/2016 14:49
Jpost Social Affairs Prize to be awarded to Special in Uniform at annual conference 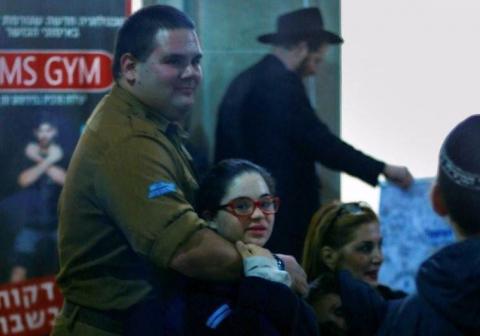 The Jerusalem Post Annual Conference announced that it will award its Social Affairs Prize for 2016 to the orgization Special in Uniform at its annual conference in New York on May 22.

Special in Uniform is a very unique program, now operating in partnership with the Jewish National Fund (JNF). It integrates young people with autism and other disabilities into the Israel Defense Forces (IDF) and, in turn, into Israeli society. Its core belief is that everyone belongs and has the right to reach his or her full potential.

Special in Uniform focuses on the unique talents of each individual participant to help find a job within the IDF that is a perfect fit for their skills and helping keep Israel safe and secure.

Special in Uniform is changing the fabric of Israeli society, helping to create a more caring and inclusive society in Israel by promoting Inclusion of people with disabilities in the IDF at a national level.

Col. (Res.) Ariel Almog, the co-founder of Special in Uniform, along with Roni Levy, a soldier in Special in Uniform, will receive the award in the presence of ministers, MKs, heads of major Jewish organizations and Israeli economic leaders at the Post's annual conference.